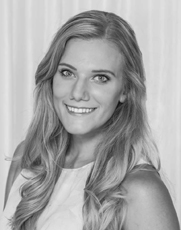 Nicole Bishop was born and raised in Gilbert, Arizona where she received her formal training at the Tempe Dance Academy in Tempe, Arizona. Nicole had the honor of dancing with the International Dance Alliance in several European countries including France, Germany, Austria, Italy, and Switzerland. During this time, Nicole also performed three consecutive seasons with Moscow Ballet’s Great Russian Nutcracker as Arabian in Phoenix, Arizona.

She received additional training from the renowned Rockette Summer Intensive in New York City for two years, Steps on Broadway, and Idyllwild Arts Academy where she received a full summer scholarship. At the age of 18, Nicole moved to New York City to train and work at Broadway Dance Center as an intern; her focus was Jazz and Contemporary under the mentorship of Derek Mitchell.  During her tenure, she was awarded best choreographer and her piece was selected to perform at the Choreographer Canvas in New York City. Nicole’s success in New York allowed her to perform on Good Morning America and work for an entertaining company performing at multiple events. She then moved to Las Vegas to perform in Don Arden’s World Famous “Jubilee!” as a Bluebell Showgirl. While in Las Vegas, Nicole also danced in a variety of commercials and shows including Guys and Dolls at the Las Vegas Hotel, Paul Mitchell, Canada’s Dodge Dart National Commercial, Heartlyn Rae’s music videos, and many more.

Nicole then moved to the island of Guam where she performed in the show ‘Dream’ as a Showgirl and a Magician Assistant. Currently, Nicole lives in Houston, Texas with her husband and is pursuing a college degree.  She is very excited to teach and share all her experiences with Amy Blake’s Academy of Dance.