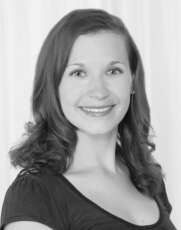 Katie Trevino Lammers received an Associate of Arts Degree in Dance at San Jacinto College South in 2008. She was a part of the San Jacinto College Dance Performing Arts Company for two years and participated in the American College Dance Festival. She received a scholarship to the Bill Evans Workshop in Brockport, NY, the Joanna Friesen scholarship from the University of Houston Dance Faculty, and a scholarship to the American Dance Festival in Durham, NC. She was a part of the UH Dance ENSEMBLE Company for two years and the Young Audience Touring Company. She earned her B.A. Degree in Dance in 2012 from the University of Houston. She has continued her dance education by taking dance classes in the Houston area and various summer and winter dance intensives.

Katie has been teaching at various dance studios in southeast Texas since 2006. She teaches all levels of ballet, pointe, modern, contemporary, jazz, and progressions.

Katie has guest performed in two of FrentiCore’s shows; there is no answer as to why me: A Dance Tribute to David Rakoff in 2013 and Quench in 2014. Recently, she has performed for Opera in the Heights, ReFine Arts production of WITCH and Frenzied Phony, and Rebecca French’s Bodies of Light at the Glass Crescent. She is the Artistic Director of the Pre-Professional Dance Company, artistic edGe. They have performed Katie’s choreography at the Houston Fringe Festival: Anything Goes, Project Dance, Comedy Dance Festival, Merging Forces, An Evening of Praise and Thanksgiving, Mind the Gap 11.0, and they were selected for Houston Fringe Festival 2017. She has danced with Uptown Dance Company for six seasons and continuing with artistic edGe in their sixth year.